Last week hosted National Cherry Cobbler Day.  I totally skipped it because we’ve had to make some temporary dietary changes in our family while my youngest daughter is on an elimination diet for Psoriasis.  But then I remembered that I had created a Paleo Cherry Crisp on my old blog!  Since I’m taking that one down soon, I thought I’d transfer the info here.  Be gracious with the less-than-beautiful pictures.  It was mostly a crafting blog and I wasn’t as worried about the food looking good.

This takes less than half an hour!

It starts with a pound of cherries, pitted and halved.

*Quick hint- if you’re craving this but cherries aren’t in season, use frozen cherries!  Just make sure you rinse them after thawing and pat them dry.

To the cherries, you will add a pinch of salt, a 1/2 teaspoon of almond extract and 1 teaspoon of lemon juice.  Mix well and put into the skillets or ramekins. 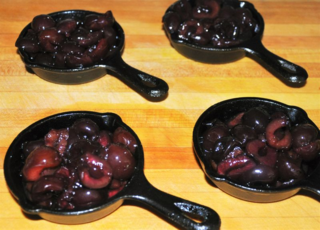 Next mix the topping ingredients: almond flour, butter, cinnamon, nutmeg, salt, and honey.  Once that is all combined you can add it to the top of each skillet or ramekin. 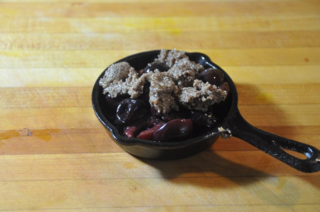 I know what you’re thinking here, it doesn’t look crazy appetizing.  But wait until it bakes up all golden and dark red.  Trust me on this one.

Into the oven it all goes for 15-18 minutes at 375.  You’re looking for browning on that topping and bubbles in those cherries. 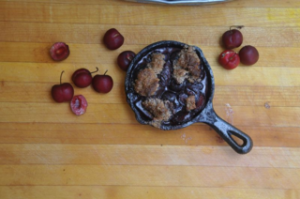 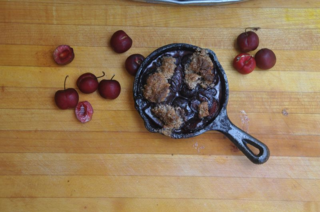