There’s a restaurant near me that has these sandwiches I adore.  They are Mediterranean melts, which us locals refer to as ‘med melts’.  It’s at one of those hipster places that bake their own bread, have gigantic chocolate filled croissants for breakfast, and there’s lots of dark wood inside.  I love it for the atmosphere, but the food is outstanding. 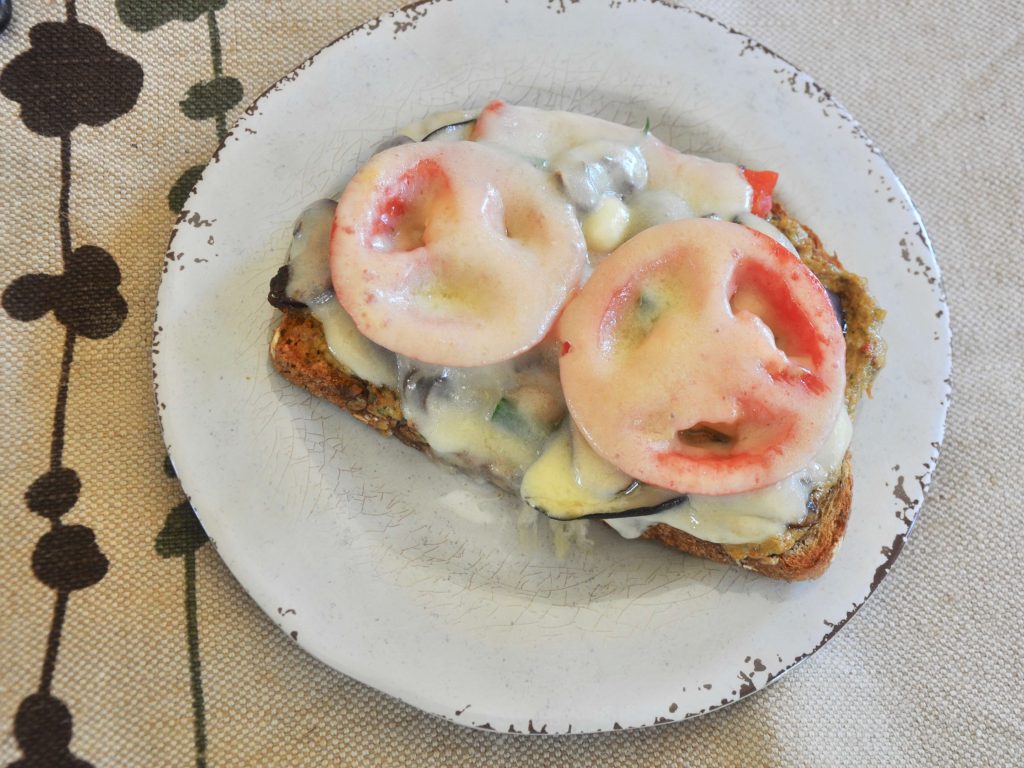 Since August is National Sandwich Month, I thought I’d share one of my favorites, which is from this restaurant.  If I am there for lunch, my favorite thing to get is the med melt.  Picture an open-faced grilled cheese sandwich with a Mediterranean twist.  It’s so crazy delicious.  Unfortunately, it’s downtown.  I really don’t love going downtown.  In my city, it’s crazy and, well, crazy.  I prefer calm.  This means that about 8 times out of 10, if I’m craving a med melt, I make it at home.

I think one of the things that makes it so delicious is that it’s not just Mediterranean vegetables piled on bread and toasted with cheese (as if that wouldn’t be fabulous itself), but that it has this creamy ricotta pesto sauce under those veggies.  It’s silky and so full of flavor, yet it compliments the other ingredients rather than competing with them.  True confession, I will eat this pesto as a veggie dip, slathered on any bread (it’s especially great on pumpernickel), or even straight up with a spoon.  It’s that good. 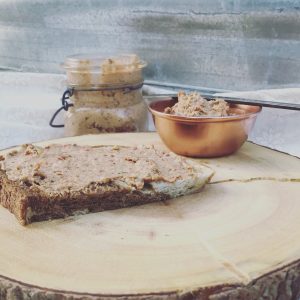 Let’s make it already! So first you start my making said delicious pesto.  The printable recipe is below, but basically, you’re whipping up basil, olive oil, parmesan, walnuts, sun-dried tomatoes, garlic, salt, and a pinch of nutmeg.  Just pop it all in the food processor and give it a whirl.

Then you roast some veggies to go on the sandwich.  I like to slice thin eggplant and tomato, sprinkle with salt and pepper, and roast until they start to look a tiny bit dried out.  Obviously, tomatoes are juicy and you aren’t trying to dehydrate them, but you know what I mean.  Just drizzle with a tiny bit of olive oil, salt and pepper them, then stick them under the broiler on a middle rack for about 10 minutes.

While those are roasting, get out some roasted red peppers from a jar and pat them dry.  Saute some sliced mushrooms in a skillet with butter salt and pepper.  Slice some green onions and you’re ready to assemble and create grilled cheese greatness.

Here’s how to put it all together:

-Toast your bread – optional, but I like it to stand up to moisture from vegetables.

-Slather on the pesto spread.

-Layer on the vegetables from your largest to smallest pieces.  I like to fill in gaps with smaller pieces as I build it up.

-Sprinkle with green onions and feta.

-Layer slices of provolone over the top.

-Stick it under the broiler until the cheese melts down over the top. 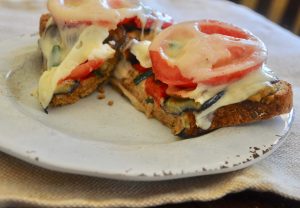 Try to wait until it’s not scorching hot so you can eat it warm, but without burning the roof of your mouth.  Then enjoy.  If you’re in public, hold in all the moans of pleasure.  People will look at you weird.  Not that I know that from experience or anything.

This is the sandwich that will make you like eggplant.  No really.

Print Recipe
Med Melts
This med melt is an open-faced Mediterranean grilled cheese. It's slathered with a creamy ricotta walnut pesto with sundried tomatoes, layered with roasted eggplant, tomatoes, sauteed mushrooms and a few other delicious savory ingredients, and then broiled under provolone cheese. You mouth will sit up and say, "Helllloooo, darling!" and your brain will say, "What? I like eggplant now?" 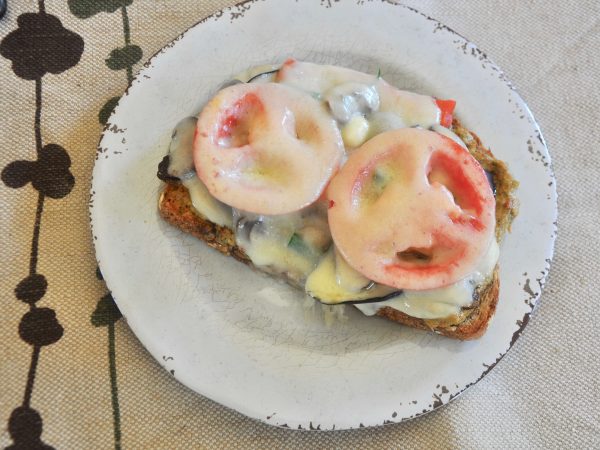