The sweet 100 tomatoes and yummy yellow pear tomatoes are exploding in my garden.  I also have a ton of fresh herbs and a need to use them up.  Fresh summer produce is in full swing!  It’s a great problem to have.  This recipe uses up some of that delectable healthy produce from my garden, as well as a few leftover small heirlooms from my local farmer’s market.

And just a note, my kids LOVE this.  They sit around the bowl of tomatoes and scoop it up with crostini.  It never makes it to a plate.

It starts with a pound of small sweet tomatoes.  In today’s version, I used a combination of Sweet 100 tomatoes and yellow pear tomatoes from my garden along with a few heirloom cherry type tomatoes from my farmer’s market.  Cut them all in half.  (I did leave a few extra small ones whole.) Then add EVOO, balsamic vinegar, chopped garlic, fresh basil, fresh thyme, fresh oregano, and dried marjoram. Salt and pepper it to taste. Let it sit in the fridge for 2 or more hours. You can make this up to a day in advance. Anymore than 24 hours and it starts to get a bit mealy in texture. This is how I used to eat them. Without crostini or anything. It was just herb marinated tomatoes back in the day. One day I was making them and saw a partial loaf of thinly sliced french bread sitting on the counter. Suddenly a Parmesan crusted slice of bread piled high with savory marinated tomatoes and dripping with that luscious marinade popped into my head. I’ve never gone back.

So I slathered a slice of bread with enough butter to make some finely grated Parmesan stick to it. While that got all crusty in a skillet with the cheese side down, I did the same thing to the other side and repeated. The rich butter and salty parm really set off the marinated tomatoes. And that’s how this was born. It has since been repeated at least once a week during tomato season. 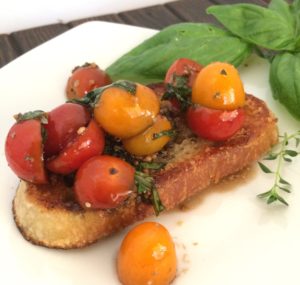