I had to stop myself from sitting down with the block and a knife and just eating it all.  But I HAD to use it.  I decided the best way to break in my new found ingredient was a grilled cheese sandwich.  Hence: I started with a garlic bourbon aoli.  While I was making the aoli, bacon was crisping up in the oven.  To make the aoli I mixed about a third of a cup of mayo, a tablespoon of choppped garlic, a splash of bourbon (use how much of it you’d like to taste), and salt and pepper.

I mixed it all together and slathered it onto a mini french bread loaf.  It had lots of air holes and I spread on enough mayo mixture to fill ’em in. I slipped it under the broiler and let it melt down into the bread.  I didn’t leave it too long because I wanted it to go in again, without being overdone.  So once the aoli was melted down, I added some fairly thick slabs of the cheese and put it back in until the cheese was bubbly and starting to brown. The now cooked bacon went on and this is where I put the top on and went to town. You could add arugula here but I didn’t have any on hand.  This would also go great with kale chips on the side.

Next time you’re at Trader Joe’s, I’d encourage you to pick up some of this cheese and try it out.  And no, I’m not an affiliate blogger for TJ or anything like that.  🙂  Just a lover of good cheese.  And grilled cheese sandwiches. 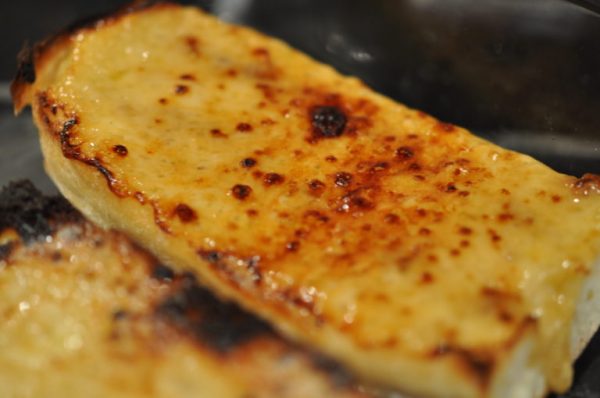