I have to admit I held off on the cauliflower crust thing for quite awhile after it came out.   Now I actually really like my cauliflower pizzas.  Once I finally did try a few recipes, I had to work on my own version to find an easier way.

Secret: I am a bit of a lazy cook sometimes.  Most cauliflower crust recipes have several steps (ricing, steaming, squeezing, etc…) and I found myself wondering if I could take any shortcuts.  Also, while I enjoyed the taste of the crust more than I thought I would, I really thought they were also kind of bland.

After a few experiments this is what I came up with.  It’s an easy crust with few steps and lots of flavor.

First step, buy cauliflower already riced or put yours in a food processor to get the small bits.  This is 2 cups and makes a 9″ pizza crust of medium thickness. Mix it all together and pat it out onto a silicon baking mat.  This really is the best way to make sure it doesn’t stick. Bake it at 425 degrees for about 15 minutes, until it starts to brown. Once you’re at this stage, you can add your normal toppings.  On the pizza below I was having an indecisive day so I made half of it pepperoni and the other half just shredded fresh basil (after putting sauce and cheese all over).  I topped both halves with a little dried oregano and a light dust of sea salt.  Return it to the oven just long enough for the cheese on top to melt and the toppings to look done.  This usually takes me between 5-10 minutes. 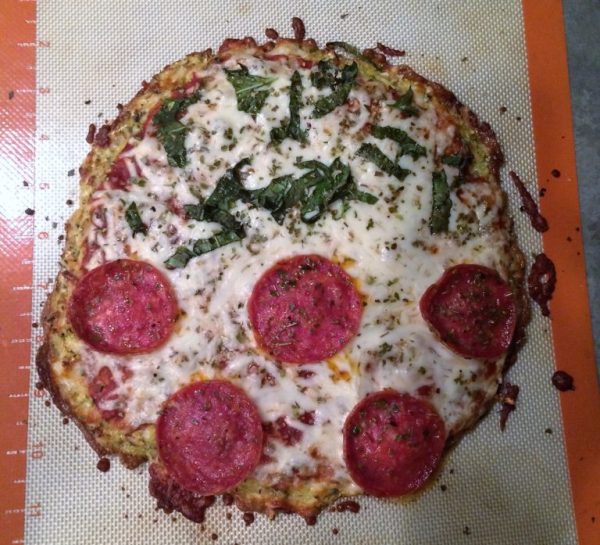